The Village of Taybeh

Home/Uncategorized/The Village of Taybeh
Previous Next

The Village of Taybeh

Taybeh is a small village located 32 kilometers north of Jerusalem and 13 kilometers northeast of Ramallah. A Canaanite village named Afra, meaning “the gazelle” or “the beautiful,” the village’s name was later changed to “Ephraim” in the Roman era, during the time of Christ. Later on, the name was changed again to “Taybeh,” meaning “good” referring to the warm hospitability of its people. According to legend, it was Saladin who bestowed this new name upon the village after staying there for a few days in the twelfth century. 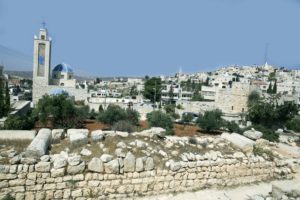 Taybeh has an overwhelmingly Christian population, and its history is very much linked to ancient Christian influences. The old village of Taybeh has been modernized in culture and lifestyle throughout the years, making it easy to miss the archeological treasures that have endured since the Byzantine and Crusader periods. While very few historical monuments are still standing today that can testify to these impressive periods in Taybeh’s past, those that do survive hold great significance for Taybeh’s residents and remain fascinating, atmospheric places to visit. The most notable of these are the ruins of the Byzantine Church of St. George (Al-Khadr) and the Crusader Castle of Al-Bobareyeh.

The Byzantine Church of St. George was built by St. Helena, the mother of Constantine, during the fifth century, on the spot where it is believed that Jesus took refuge during some of his final days. According to biblical references, Jesus had performed the miracle of resurrecting Lazarus in Bethany and then retired to present-day Taybeh with his apostles to rest before making his last journey to Jerusalem. The church was built in the Byzantine architectural style, defined by a rectangular hall ending with an apse and two rows of columns that divide the hall into three naves, forming the basilica. Subsequent changes were made to the building style by the Crusaders in the twelfth century as evident in the addition of the facade wall and the reduction of the size of the interior space. 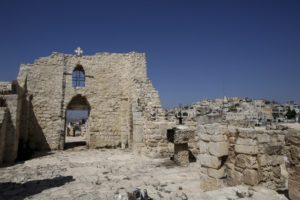 Though today only a shell of its former glory, the church is used by the three different Christian faiths in Taybeh – Greek Orthodox, Roman Catholic, and Greek Catholic (Melkite). Many families baptize their children in this church, using the old font that dates to the sixth century. Moreover, the church is the site of celebration for many Christian feast days, including Holy Saturday and Palm Sunday, and Taybeh-specific occasions, such as the festival of St. George (Al-Khadr), the patron saint of the village. At times, animal sacrifices are still performed at the ruins to honor special family events, with the meat being donated to the needy. 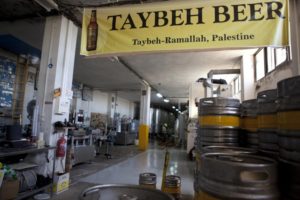 The mark of the Crusaders has been left all over Palestine in the form of imposing castles, one of which is Taybeh’s Al-Bobareyeh Castle. Built on the highest point (915 meters above sea level) in the village, it was intended to help soldiers keep watch over the surrounding area during the crusades.
These days, Taybeh has become synonymous with quality Palestinian beer due to its thriving brewery.