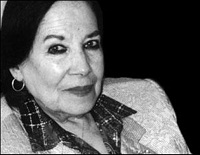 Born in Nablus to the wealthy Palestinian Touqan family known for their accomplishments in many fields, she received schooling until age 13 when she was forced to quit school at a young age due to illness. One of her brothers, Ibrahim Touqan, known as the Poet of Palestine, took responsibility of educating her, gave her books to read and taught her English. He was also the one who introduced her to poetry.Touqan eventually attended Oxford University, where she studied English and literature.

Touqan eventually published eight poetry collections, which were translated into many languages and enjoy renown throughout the Arab World. Her book, “Alone With the Days,” focused on the hardships faced by women in the male-dominated Arab world. After the Six-Day War, Touqan’s poetry focused on the hardships of living under the Israeli occupation. One of her best known poems, “The Night and the Horsemen,” described life under Israeli military rule.

Touqan died on December 12, 2003 during the height of the Al-Aqsa Intifada, while her hometown of Nablus was under siege.The poem Wahsha: Moustalhama min Qanoon al Jathibiya (Longing: Inspired by the Law of Gravity) was one of the last poems she penned while largely bedridden.

Touqan is widely considered a symbol of the Palestinian cause and “one of the most distinguished figures of modern Arabic literature.”