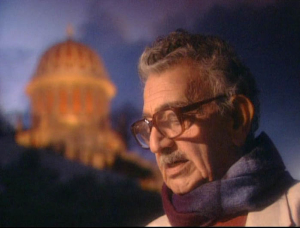 Habibi was born in Haifa on Aug. 29, 1922 in today’s Israel, which at that time was part of the British Mandate of Palestine. Born in to a Protestant Palestinian Arab family (his family had originally been Arab Orthodox but converted to Protestantism due to disputes within the Orthodox church) In his early life he worked on an oil refinery and later was a radio announcer. Under the Mandate he became one of the leaders of the Palestine communist party.

Habibi was one of the leaders of the Palestine Communist Party during the Mandate era. He supported the 1947 UN Partition Plan. When Israel became a state he helped form the Israeli communist party ICP. He served in the Knesset between 1951 and 1959, and again from 1961 until 1972, first as a member of Maki, before breaking away from the party with Tawfik Toubi to found Rakah. After a conflict about how the party should deal with the new policies of Mikhail Gorbachev he left the party in 1991.

Habibi began writing short stories in the 1950s, and his first story, The Mandelbaum Gate” was published in 1954. In 1972 he resigned from the Knesset in order to write his first novel: The Secret Life of Saeed the Pessoptimist, which became a classic in modern Arab literature. The book depicts the life of an Israeli Arab, employing black humour and satire. It was based on the traditional anti hero Said in Arab Literature. On a playful way it deals on how it is for Arabic people to live in the state of Israel. And how one who has nothing to do with politics is drawn in to it. He followed this by other books, short stories and a play. His last novel, published in 1992, was Saraya, the Ogre’s Daughter.

In 1990 Habibi received the Al-Quds Prize from the PLO. Two years later (in 1992) he received the Israel Prize for Arabic literature.His willingness to accept both reflected his belief in coexistence. Though after accepting the Israel Prize a debate set off among the Arabic intellectual community. Habibi was accused of legitimating the Israel anti-Arabic policy. Habibi replied to the accusations: “A dialogue of prizes is better than a dialogue of stones and bullets,” he said. “It is indirect recognition of the Arabs in Israel as a nation. This is recognition of a national culture. It will help the Arab population in its struggle to strike roots in the land and win equal rights”.