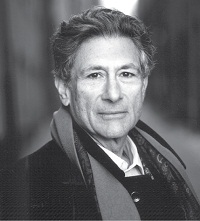 (1978 – 2003)
Edward Wadie Said was a Palestinian-American literary theorist and advocate for Palestinian rights. He was University Professor of English and Comparative Literature at Columbia University and a founding figure in postcolonialism. Robert Fisk described him as the Palestinians’ “most powerful political voice.”

Said was an influential cultural critic and author, known best for his book Orientalism (1978), which catapulted him to international academic fame.

The book presented his influential ideas on Orientalism, the Western study of Eastern cultures. Said contended that Orientalist scholarship was and continues to be inextricably tied to the imperialist societies that produced it, making much of the work inherently politicized, servile to power, and therefore suspect.

Grounding much of this thesis in his intimate knowledge of colonial literature such as the fiction of Conrad, and in the post-structuralist theory of Foucault, Derrida and others, Said’s Orientalism and following works proved influential in literary theory and criticism, and continue to influence several other fields in the humanities. Orientalism affected Middle Eastern studies in particular, transforming the way practitioners of the discipline describe and examine the Middle East. Said came to discuss and vigorously debate the issue of Orientalism with scholars in the fields of history and area studies, many of whom disagreed with his thesis, including most famously Bernard Lewis.

Said also came to be known as a public intellectual who frequently discussed contemporary politics, music, culture, and literature, in lectures, newspaper and magazine columns, and books. Drawing on his own experience as a Palestinian growing up in a Palestinian Christian family in the Middle East at the time of the creation of Israel, Said argued for the creation of a Palestinian state, equal rights for Palestinians in Israel, including the right of return, and for increased pressure on Israel, especially by the United States. He also criticized several Arab and Muslim regimes. Having received a Western education in the US, where he lived from his high school years until his death, Said tried to use his dual heritage, the subject of his prize-winning memoir Out of Place (1999), to bridge the gap between the West and the Middle East and to improve the situation in Israel-Palestine. He was a member of the Palestinian National Council for over a decade and his pro-Palestinian activism made him a figure of considerable controversy.

In 1999, Said co-founded with Daniel Barenboim the award-winning West-Eastern Divan Orchestra, made up of children from Israel, the Palestinian territories, and surrounding Arab nations. He was also an accomplished concert pianist. Active until his last months, Said died in 2003 after a decade-long battle with leukemia.

Said’s writing regularly appeared in The Nation, The Guardian,[29] the London Review of Books, Le Monde Diplomatique,Counterpunch,Al Ahram, and the pan-Arab daily al-Hayat. The themes of his writings included literature, politics, the Middle East, music, and culture.