Home/Uncategorized/Olive-Wood Workshops in Bethlehem
Previous Next

In Palestine, and particularly in Bethlehem, olive-wood carving is a deeply rooted tradition. It is said that the craft arrived in the area as early as in the fourth century, together with the advent of Christian pilgrimage. 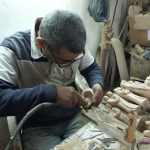 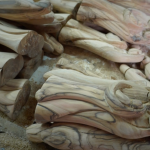 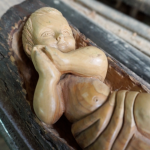 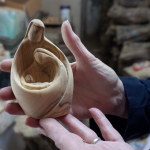 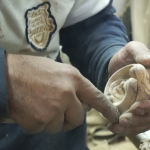 However, the true turning point in the development of olive-wood art took place around the fourteenth century. This was when Franciscan friars opened a school in Bethlehem where, in addition to teaching theoretical subjects they also promoted making handicrafts as an income-generating activity. The artisans quickly learned the techniques of olive-wood carving and started to manufacture various religious items such as crosses, rosaries, liturgical furnishings, or nativity scenes. Since that time, the families specializing in the craft have been passing down the carving techniques from generation to generation, from father to son.

Olive wood was chosen for the carvings because it is relatively easier to work with than other woods and can be sculpted with simple hand tools. It also has a diverse variety of natural color and tonal depth, which makes each piece extraordinarily unique.

Today, the economic well-being of a good number of Bethlehem families still depends on olive-wood handicrafts. Every two years olive trees need to be pruned so that they bear more and better fruit. These days, although some olive-wood branches are supplied from villages near Bethlehem, the majority come from the Nablus and Tulkarem regions where the olive groves are more abundant.

One piece of olive wood passes through various stages and often involves work of multiple artisans before taking its final shape that is ready for sale. Nowadays, in order to make the process faster, craftsmen use drilling machines to create rough outlines of items. Selected pieces of wood are matched with previously finished figures that act here as molds. The machine copies their shapes, helping in the most difficult and time-consuming parts of carving. After that, skilled artisans manually add details such as carved ornamentations on crosses or facial elements on figurines from nativity sets. When the carving is finished, the items are sanded down and polished. The final stage consists of coating the figures with olive wax which gives them a natural shine. At present, some of the most favored items are nativity sets, elaborate crosses, and Christmas tree decorations. The non-religious pieces have also grown in popularity and include kitchen utensils, coasters, camels, or donkeys.

Some of the local artisans open their work spaces to visitors to let them see the steps of the production process. In Bethlehem, a couple of the famed workshops are located in the area of the old city. In the shops that are located just beside the workshops, tourists and pilgrims from around the world purchase the traditional wooden souvenirs.

The olive-wood carvings from Palestine have found their way to the rest of the world as well. Some cooperatives and businesses specialize in exporting their artworks to various locations abroad. In addition, thanks to the advancement of today’s technology, the beautiful traditional items can also be purchased online. By selling the items in the international markets, the craftspeople are able to continue to strive for the preservation of their traditional craft and at the same time secure their living.

To know more about traditional Palestinian handicrafts, visit our website at www.visitpalestine.ps, or contact the Visit Palestine Information Center in Bethlehem via info@visitpalestine.ps or (02) 277-1992, or visit us at our location in Bethlehem.