Experience the Jerusalem Wilderness with the Bedouins of ’Arab Ar-Rashaida

Experience the Jerusalem Wilderness with the Bedouins of ’Arab Ar-Rashaida

The winter months are the best time to enjoy the warmer areas of the Jerusalem Wilderness, located just a few kilometers east of Jerusalem. There, the hilly landscape slopes steeply towards the Jordan Valley and the Dead Sea, which marks the lowest point on Earth. Part of this area is home to ‘Arab Ar-Rashaida, the Bedouin tribe that descends from Banu Abs, native to the Hejaz region of Saudi Arabia. They would be pleased to introduce you to their way of life and ancient traditions, as well as be your companions and guides in the desert area.

Due to various economic and political reasons, the number of true nomadic Bedouins in the world is quickly shrinking and many of them are now settled. Today, many people of ‘Arab Ar-Rashaida live among built-up housing areas, which have access to electricity, as well as in more traditional tents, close to their animals.

The hosts will welcome you into their encampments where women who take care of small children and animals will offer you a cup of tea or a freshly made meal. Even if you show up for an unplanned visit, Bedouin hospitality will make sure that you, the guest, are the first to partake of whatever food they have prepared for themselves. It could be mjadara − a mix of dark lentils, rice, and caramelized onions − and a generous piece of shrak bread, a thin whole-wheat bread baked on a domed griddle over an open fire. 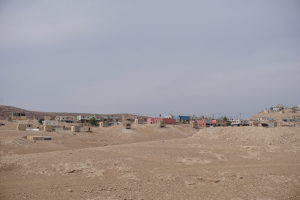 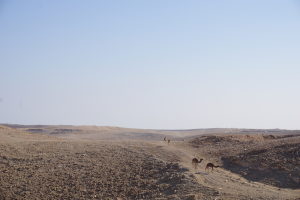 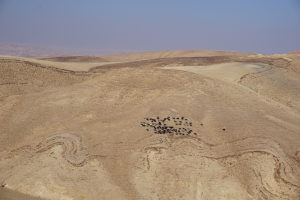 The Bedouins who host visitors in the area offer adventurous pickup rides to a steep cliff that overlooks the shores of the Dead Sea, full of ups and downs, but definitely worth the experience. The place offers an unforgettable view of the azure water and white salt formations that contrast with the brown soil of the desert, which can be enjoyed while sipping a cup of fire-brewed, sweetened black tea. On the way, visitors can enjoy views of goat herds and sheep traversing the vast lands of the wilderness, and groups of camels − those massive animals with gentle movements − wandering freely and taking advantage of the seemingly endless space of the desert. 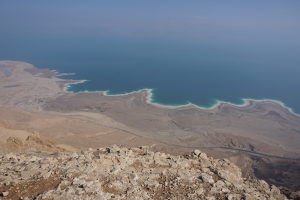 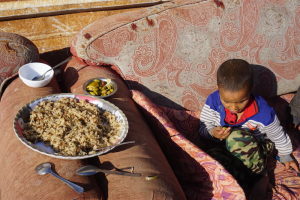 The cliff becomes the annual stage for Al-Kamandjati Sunrise Concert, a part of the Musical Journey Festival. This year the festival can be enjoyed from April 5 to 22, with the concert in ‘Arab Ar-Rashaida on the final day. The event is usually preceded by a nighttime/early-morning hike leading to the site. The sounds of beautiful music accompany the sunrise from behind the high Jordanian mountains.

Those who would like to spend a night in the area of ‘Arab Ar-Rashaida have a couple of options. The Bedouins can take you to sleep in one of the caves or pitch a tent in the area overlooking Ein Gedi. A larger tent is also available for visitors who seek the more comfortable experience of sleeping on a bed and having access to a toilet and fresh water.